Found our list of Animation Software helpful? We’re here to help you make the right choice and automate your business processes. Let’s discover some of the essential factors that you must consider to make a smarter decision!

What is Animation Software?

Animators use cartoon animation software for creating the body (or any other object) using designing tools provided by the solution. Then the animator moves the character in the animation programs with special controls that are connected to each body part or the object. In the case of the human body, it will be hands, elbows, lips, etc. For various other objects, animators can set these points of movement as per their animation requirements. Then sets a keyframe when all the body parts are in the correct position. These keyframes proceed to move forward in time and move all these controls again to create another keyframe. The animated video software then calculates the journey the body part is going through between each of those keyframes.

The animator will spend most of the time looking curves that represent the movement of different body parts over time. The key advantage here of using computer software for creating animation is that the character's body parts are always present and should be taken into consideration while editing. 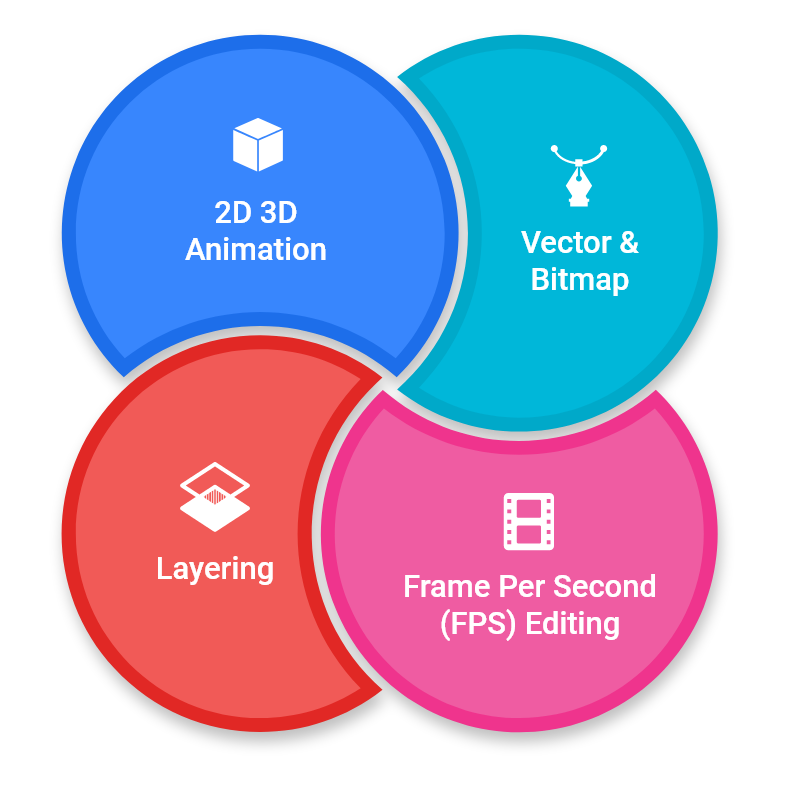 An animation software lets you design in both two-and-three-dimensional formats. In today’s day and age of virtual reality, VR-headsets, 3D TVs and phones, you need a software that can help you perform 2D and 3D designing without needing to jump from one solution to another.

With this, you can easily design characters, sceneries, and architecture in both formats simultaneously. Additionally, you can also convert a 2D format design into 3D and vice versa.

FPS is the number of frames that are displayed on a screen in one second. Frame refers to single images, which when condensed together, gives the impression of motion. With animation maker software, FPS editing is made simpler and can be done without much hassle. For example, if your FPS is set at 30 frames per second (fps), frames 1 to 30 will denote the first second of the display, 31 to 60 will be the next second, and so on. If you divide the number of frames in animation by frame per second, you’ll get approximate of the total number of seconds a frame is in animation.

This explainer video software offer is used by employees for their office presentation. A whiteboard story animation software shows the movement of a hand like figure drawing on a whiteboard.

Layers are used for separating different elements of an image. Layering has been an integral part of video animation software, dating as far back as the 1920s and 30s, and has been carried over into the modern digital world. Using the video animation software, you can make virtual layers with different elements that can be moved to the background or foreground. It makes it simpler to move objects, either in front of or behind an image or film. You can use layering to keep objects and characters separated from each other.

You must be aware of different bitmap graphic formats like JPEG, PNG, GIFs, etc. These are made up of a grid of pixels in which each pixel contains specifically coded information about how color should be displayed. Bitmap graphics have a fixed number of pixels in a grid, measured by pixels per inch (PPI). The bitmap resolution puts a limit on the size of the graphic, and it can’t be resized without compromising the image quality. In an animation software, bitmap designing is the default designing sets. Unless you change to vector animation, you’ll be designing in bitmap format.

Vector animation is a type of animation, where motion & objects are controlled by vectors instead of pixels. Vector animation is used for creating cleaner & smoother animation because such images are resized & displayed using mathematical values instead of stored pixel values. Animation software come with the option of using vector designing using which, graphics created are resolution-independent, i.e. they are highly scalable. Since vector graphics don’t comprise of a fixed grid, they can be easily resized without compromising image quality. This makes it ideal for different graphic design applications like creating brand logos. Vector animation lets designers do that, without pixelating the image. Best 3D animation software does feature this module, for a smoother look across the different dimensional axis. 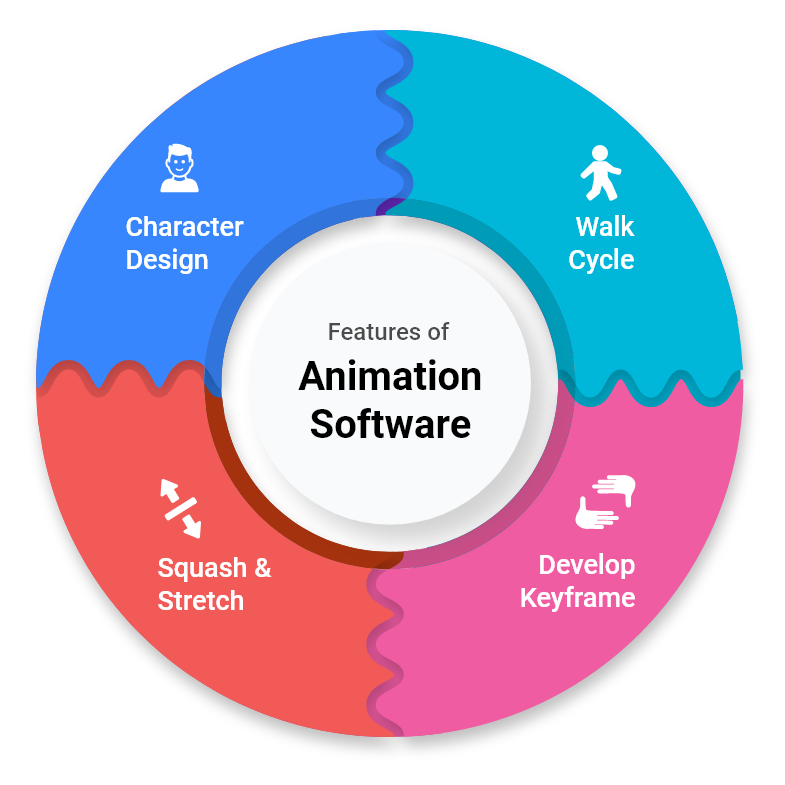 Aspect ratio is the proportional relationship between the width and height of an image or frame. Using animation software, setting aspect ratio becomes much easier. You can also add different aspect ratios for different frames, to enhance motion.

In the world of animation, keyframe refers to a specific frame that an animator uses as a reference guide around which he/she builds the rest of his work. Animators use keyframes like explorers use the north star- a guiding force to base their work. With a video animation software, you can create a keyframe easily and design the rest of your work around it. Animation software can also be used to auto-design character designs from already made keyframes.

Want to make animated characters that resemble Claymation? Or sceneries with disproportionate elements? Making any and all types of characters and scenery designs is not only simpler, but also much more effective with animation tools.

In animation, walk cycle refers to a series of illustrations made in sequence and looped to create the movement of a character. You can use this feature to create a loop over and over, avoiding the need to animate motion in each frame individually.

Animation software comes with the option of creating detailed character sheets during production. When you make a film or video, character sheets are created to maintain a record of all the characters to be designed and featured in the frames. These records include key character details such as height, skin colour, costumes, accent, voice pitch, gender, etc. When designing, you can use this software to build a character sheet for easy reference. This sheet can also be shared among your team members, ensuring character design consistency.

This feature lets you apply contrasting shape change (squashed pose or stretched) to give characters a flexible and more lifelike feel. Else, your characters will have a rigid & stiff look.

For businesses, making a lasting impression is key to attracting more customers. With the use of animated video maker, businesses can create impressionable visuals and creatives that communicate better with customers. It helps improve your brand’s overall image and, you get to convey exactly what your company wants to say.

A well designed creative or GIF attracts people’s attention quicker, helping communicate ideas and pitches effectively. Businesses use the animation software to enhance even the driest of topics, simplify them and make them more relatable for customers.

If you use an animated video maker, the whole process of designing and creating graphics becomes less time-consuming and resource exhaustive. It’s a unified solution, combining elements of video & photo editing, which allows for creativity to flow.

With a flash animation software, you can create vivid animation of the highest quality. With this best professional video editing software maker helps with vector illustration, color enhancement, retouch, etc. Such features help in rendering high-quality graphics that are engaging and create a lasting impression.

Attracting and holding the attention

With the animation tools, businesses can create captivating images, GIFs and videos that attract user’s attention and retain it.

Using computer animation software is less labour intensive than hand-drawn animation techniques. This software gives you a greater margin of error as mistakes can be undone on digital files much easier, without needing a lot of time. In hand-drawn animation, the slightest mistake leads to a frame being drawn all over again, which is not the case in the animated video maker. Simply add layers to the frame, work on your mistakes and move on.

Any software that’s cumbersome to use will cause much trouble to you. You won’t be able to use all its features. You will end up spending more time in understanding the software, rather than getting work done. An animation software should be easy to use, so that it can be instrumental in increasing profitability and staying competitively viable.

In case of trouble using animation software, how fast can the vendor solve your problems? That’s an important clarification to make before buying 2D/ 3D software, as any delay in support will affect your workflow. Choose a vendor whose response time is quick & efficient.

Get Demo and Live Chat for Top animation software

Go for a solution that comes with a free trial/demo or both. A demo lets you get a better understanding of the product before deployment, so don’t be shy to ask vendors.

Get personalized software recommendation with the help of our Artificial Intelligence

Adobe After Effects CC for teams

Doodly is a simple drag and drop doodle video creating solution. Users get to create realistic and professional looking... Read More About Doodly

Animation software works on most system configurations. However, for optimal working, update your system with the latest hardware and software.

If you’re a start-up or small business, video animation software is all the more useful for you. Animation software helps in adding spice to your graphics and creatives, subsequently making your marketing efforts stand out. In a world where audiences are over-saturated with the same content everywhere, how awesome it would be if they find your brand trying to do something different! Go for it, take the leap.

Vyond is a web-based animation making software that is suitable for all industry types. Users get access to a massive m... Read More About Vyond

Adobe Animate CC for Teams formerly known as the (Flash pro) is one of the world’s most widely used software for 2D a... Read More About Adobe Animate

Saola Animate is a top-notch solution to create HTML5 animations and various other types of interactive web content. I... Read More About Saola Animate

PixTeller is an easy to use online image editor and animation making software that helps its users create animated GIFs... Read More About PixTeller

VideoScribe is a whiteboard animation tool. It can be used for marketing, education, event creation, or any other p... Read More About Videoscribe

Explaindio is an animation software to create 2D and 3D videos. This video creating software is jam-packed with feature... Read More About Explaindio

Muvizu is an interactive 3D animation software. It is one of the best software for creating and rendering 3D animations... Read More About Muvizu

Boris Sapphire is a video editing and animation software. It allows designers to create attractive and organic visual... Read More About Boris Sapphire

An animated video making tool, Powtoon is a software that gives you the freedom to express yourself. You can use it in... Read More About Powtoon

I'm looking for Animation Software that is:

We’d love to hear
your feedback!
Review your software

Yes, third-party integration is possible with animation software. During the time of purchase, simply ask the vendor to explain the integration process to you, to avoid further confusions.

Before making a purchase, clarify why you need animation software and what it should do for your business. Do you need the software to improve your marketing? Are you looking to upgrade your existing old and archaic video editing software? Your end-motif of using an animation solution will help you choose the best one, suited to your business needs.